January 16 (Renewables Now) - The German government, coal mining states and major utilities have agreed on a roadmap for shutting down the country's lignite-fired power plants, and on compensation payments for operators.

Many analysts and environmental activists immediately dismissed the agreement, arguing that the pace of decommissioning was too slow to comply with Germany's emissions reduction obligations. Investors appeared to consider the agreement positive for the energy companies, as shares of lignite plant operator RWE rose sharply after the announcement.

Almost one year after a government-appointed commission agreed in principle on phasing out coal in Germany, the government, mining states and coal plant operators have ironed out the coal exit's details. Economy minister Peter Altmaier said a "breakthrough" had been achieved in high-level talks in Angela Merkel's chancellery during the night and that the "necessary but difficult decisions" ultimately had been made in consensus. He added an agreement had also been found on compensation payments for lignite plant operators, arguing that Germany would "end the age of coal-fired power production in a plannable and economically prudent manner."

Environment minister Svenja Schulze called the agreement "a big step" for climate protection and an important international signal. "We are the world's first country to exit nuclear and coal in a binding way." She stressed that the exit will start immediately, and that a "massive roll-out" of renewables is necessary to make it a success.

But many analysts favouring ambitious emissions reductions and environmentalists were not impressed because they said the proposed pace of the exit was too slow. "The government has driven the coal compromise into the ground. There is no steady emissions reduction between 2023 and 2030," said Felix Matthes, research coordinator for energy and climate policy at the Institute for Applied Ecology. 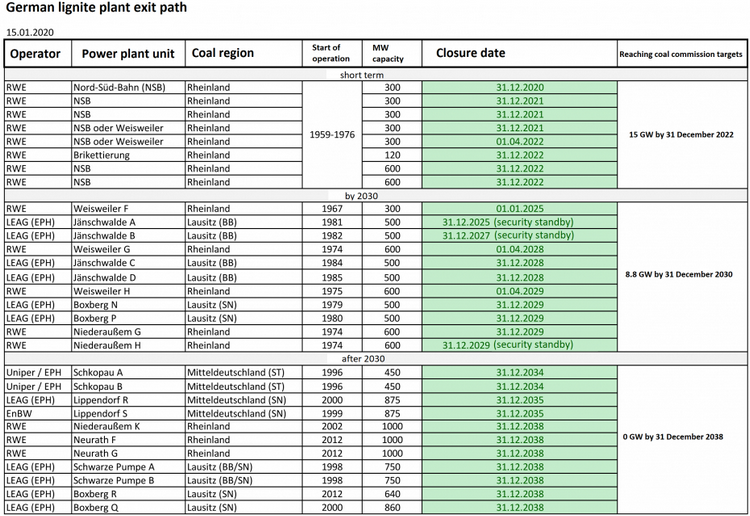 Dave Jones, analyst at British climate NGO Sandbag, said it was "hard to paint this as good news," because decommissioning starts too slowly and finishes too late. With reference to an increase in RWE's share price following the agreement, Hanns Koenig from Aurora Energy Research said: "Whatever one may think about today's German coal exit announcement, investors clearly think it's a good deal for RWE."

According to media reports, RWE will receive EUR 2.6 billion in compensation payments, while operators in eastern Germany will get EUR 1.75 billion.

The agreement makes Germany the largest economy on the globe with concrete plans to end the use of coal to produce electricity. A coal exit is more difficult for Germany in comparison to many other countries, because it is still heavily reliant on the fossil fuel, some of which is still mined domestically, and because it is phasing out nuclear power at the same time in its landmark energy transition (Energiewende) towards renewables.

The government said the agreement would honour the coal exit commission's compromise and pave the way for a decommissioning path that the electricity grid "can cope with." According to the agreement, the total lignite capacity will be reduced to 15 gigawatts (GW) by the end of 2022, with eight plants operated by RWE in western Germany going offline by that year. In a second phase starting two years later in 2025 and ending in 2029, capacity will be cut to 8.8 GW. A total of eleven units are to be taken offline, three of which are transferred into security standby. Five of these eleven units are operated by RWE in the west and six by LEAG, a subsidiary of Czech investor EPH, in eastern Germany.

During the last phase starting in the 2030s, the remaining eleven lignite units in the country are scheduled for decommissioning between 2034 and 2038, the year agreed by the coal exit commission as the very last for the fossil fuel in the country. But the agreement also says there will be an assessment in 2026 and 2029 to see whether the last phase of decommissioning in the 2030s can be brought forward by three years. In this case, the coal exit would be completed in 2035 instead of 2038.

The government said it will increase the expansion of renewable energy sources to reach the goal of a 65% share in power consumption by 2030 in order to compensate for the closure of coal power. It will also seek to expand combined heat and power systems and install "two gas plant capacities" to cushion "the vanishing of large quantities of controllable energy," the government statement read.

Finance minister Olaf Scholz said the agreement would ensure that the phase-out's provisions will be implemented over the course of the next two decades "even if the government at the time will be different from the one we have now." The government's plan is to finish the agreement's legislative procedure in the first half of 2020.

Regarding the opening of a new hard coal plant, Datteln 4, economy minister Altmaier said that operator Uniper had already obtained a permit for commissioning the plant and that the government gave it the green light due to the "complex" compensation payment scheme. He added that the coal exit commission's proposal to not let the plant go online had been formulated "cautiously" and it ultimately turned out that more CO2 could be saved if older plants were closed earlier instead.

Greenpeace Germany head Martin Kaiser, who was a member of the coal commission, said the decision to open a new coal plant this year clearly showed that the government doesn't address the climate crisis. "The first assessment will reveal that Germany can and must exit coal much quicker. This is the only way to stick to the Paris Climate Agreement."

An agreement was also found on conserving Hambach Forest, which RWE planned to clear to make room for a nearby lignite mine. The forest has became a symbolic battle ground for climate activists from Germany and beyond, and will now be spared. However, the neighbouring open cast mine Garzweiler is still going to be needed for supply security reasons, the government said. This means that several adjacent villages will be demolished as planned.

Given the possibility that power prices will rise in the wake of the coal plant shutdowns, energy-intensive companies that compete internationally will receive an "appropriate subsidy" by 2023, the government said. Altmaier said that additional government earnings generated with the new CO2 pricing scheme in the transport and buildings sectors would be used to lower Germany's renewable energy surcharge and thereby also the power price. With reference to concerns that the coal exit could compromise the country's power supply security, the economy minister stressed that Germany already today often imports power. However, its current "excess production" of electricity was likely to abate in the wake of the coal phase-out and a "European power market" would develop further. "We're sure that a sufficient power supply can be guaranteed," he added.

Industry lobby group BDI called the agreement "unsatisfactory," arguing it would violate central aspects of the coal commission's compromise. BDI president Dieter Kempf said the commission "for a reason" had stressed that its proposals have to be implemented word by word for the phase-out to remain consistent. "The agreement doesn't make any mention of compensation for higher grid fees, which would have benefitted all power customers." Apart from that, companies could expect higher costs in the European emissions trading system (ETS), which would damage Germany as a location for industrial production.

The agreement also confirmed the structural support payments for coal mining regions in the states of Brandenburg, Saxony-Anhalt, Saxony and North Rhine-Westphalia, and that workers in lignite plants and mines are going to receive so-called "adjustment money" until 2043, a provision that already exists for workers in the hard coal sector. The coal states will receive a total of 14 billion euros until 2038 for direct investments in the regions and the federal government will provide another 26 billion euros to implement "further measures" to strengthen local economies.

Coal worker trade union IG BCE said the agreement would "set the benchmark" for a socially acceptable and climate-friendly transformation of an industry branch. Union leader Michael Vassiliadis said it had achieved to reconcile social security and investments and would "lay the groundwork for linking social and climate justice." Vassiliadis stressed that a quick expansion of renewable energy sources was now necessary, stressing that the phase-out roadmap urgently has to be complemented by a "phase-in roadmap" for renewables.

Germany gets EC nod for more measures to boost renewables