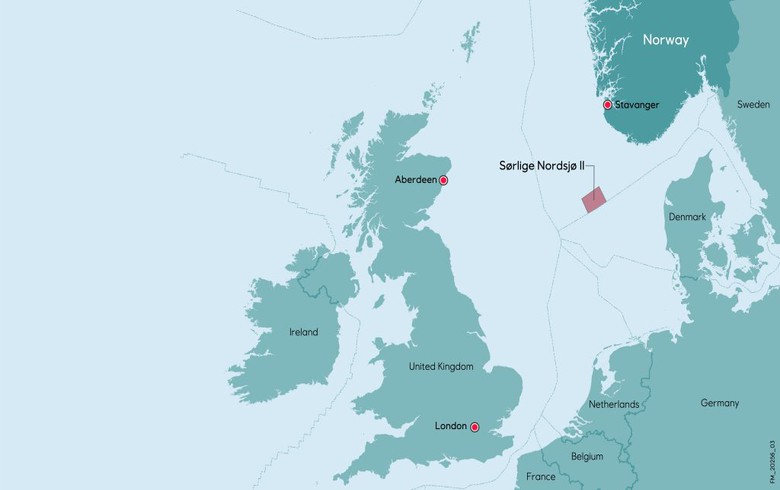 May 26 (Renewables Now) - Norwegian companies Equinor ASA (OSE:EQNR) and Norsk Hydro ASA (OSE:NHY) and Germany’s RWE AG (ETR:RWE) have teamed up in a bid to develop a large offshore wind park in Norway.

The companies said today they have signed a collaboration agreement to jointly submit an application to develop a large-scale bottom-fixed offshore wind farm in the Sorlige Nordsjo II area in the Norwegian North Sea. This is one of the two areas that the Norwegian government has opened for offshore renewables. It is now working on the licensing process for offshore wind projects.

The partners see Sorlige Nordsjo II, which borders the Danish part of the sea, as ideally located for supplying power to Europe. They say it has one of the best wind resources in the world and water depth of between 53 metres (174 ft) and 70 meters.

When announcing the opening of the two areas last year, the Norwegian government said they provide the opportunity to develop a combined 4,500 MW of wind power. Utsira Nord spans 1,010 square kilometres and is suited for floating wind power, while the 2,591-sq-km Sorlige Nordsjo II can accommodate bottom-fixed wind parks and possibly floating solutions.

The companies state they have expertise along the entire offshore wind value chain, from development to route to market. Equinor and RWE have together developed the 385-MW Arkona offshore wind farm in the German Baltic Sea.

Energy and aluminium company Hydro participates in the partnership through its newly formed renewables development unit Hydro REIN, and RWE through RWE Renewables.