EIA expects stable US biofuels production, consumption, and trade through 2020 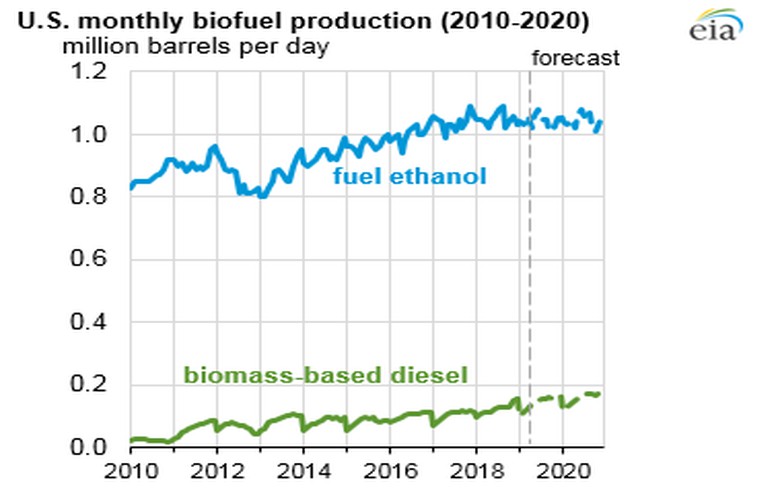 The most common biofuels consumed both domestically and globally are fuel ethanol and biomass-based diesel. Fuel ethanol is primarily blended with motor gasoline blendstock in the US to produce 10% ethanol blended motor gasoline, or E10. Biomass-based diesel, which collectively refers to biodiesel and renewable diesel, is typically mixed with ultra-low sulfur distillate fuel at varying percentages.

EIA expects that US fuel ethanol production will remain near current levels, decreasing slightly in 2019 to 1.04 million b/d and increasing to 1.05 million b/d in 2020. Fuel ethanol production is largely dependent on domestic motor gasoline consumption, which has been relatively stable in recent years, as fuel economy improvements have largely offset increases in population and vehicle miles traveled.

Biofuels account for a relatively small share of total transportation fuels, with consumption supported over time by the federal Renewable Fuel Standard (RFS) as well as state-level biofuel programs. US consumption of motor gasoline was 9.31 million b/d in 2018, and EIA expects that it will increase by less than 1% annually to 9.36 million b/d by 2020. 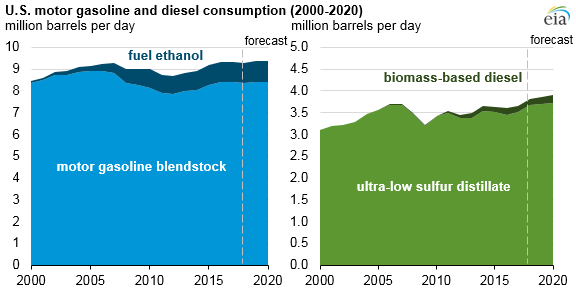 US diesel fuel consumption, which includes biomass-based diesel, is expected to increase from 3.8 million b/d to 3.9 million b/d between 2018 and 2020 in the STEO. The share of biomass-based diesel in diesel fuel increases from 3.6% in 2018 to 4.5% in 2020. Demand for renewable diesel, which includes stand-alone production facilities as well as petroleum refiners that co-process renewable feedstocks in downstream units such as hydrotreaters, is expected to grow in 2020.