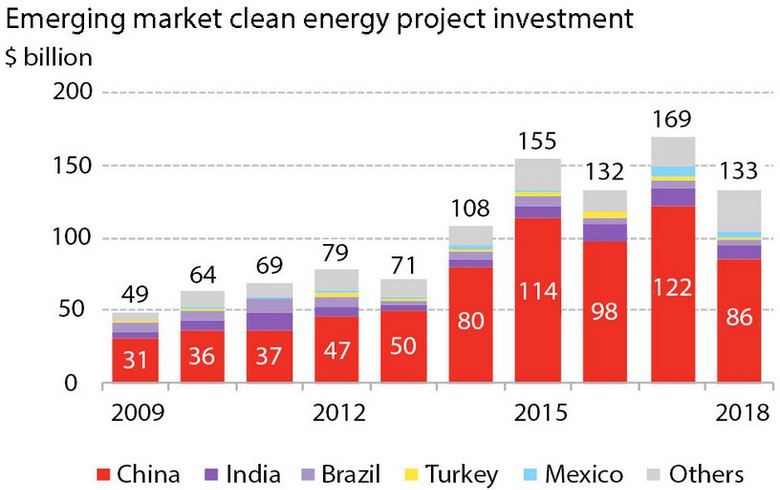 If China, India and Brazil are taken out of the calculation, the clean energy investment figure for 2018 arrives at USD 34 billion, up from USD 30 billion in 2017. The main actors were Vietnam, South Africa, Mexico and Morocco with a combined USD 16 billion of investment.

Most of the new clean energy capacity installed in emerging markets came from wind and solar and their declining costs also contributed to the decline in absolute dollar investment.

BNEF says that the transition to clean electricity in developing countries is not happening nearly fast enough to limit global carbon dioxide (CO2) emissions or the consequences of climate change. In 2018, the volume of actual coal-fired power generated and consumed in these markets jumped by 500 TWh to 6,900 TWh. In the 104 emerging markets surveyed in Climatescope, the share of coal power was 47%.

On a more positive note, the research firm said coal-fired power plants construction has reached its lowest level in a decade. Project completions in 2018 stood at 39 GW, two-thirds of which in China. The peak for new coal was recorded in 2015 at 84 GW.

India, Chile, Brazil, China and Kenya are the five countries with the highest overall potential for clean energy development, according to the Climatescope.